Okay, I know it has been a long time, since I uploaded a post, but I still want to try and keep this blog going and try to tell most of my experiences. So let’s just start around where I left off. On Tuesday the 29th of September our first classes started. Now it wasn’t just do whatever fun things you want to do anymore. The first lessons weren’t that exciting. Most lessons started with a small introduction to the course and what we would be doing in the rest of the year. Although it was the first day of school I and a few other people decided that we should go to Ikea, so that’s what we did, with ten people in two four person-taxis driving to Ikea for one hour. It was a lot of fun, and finally some real good food, instead of the canteen food.

Also in that week I had 2 basketball try-outs, to get on the basketball team. I have no real experience with playing basketball or what so ever, but because I’m so tall, everyone was saying I should play basketball. So I tried, and surprise surprise… I got on the second team of our school!

Another really great experience in that weekend was that I went to KTV. KTV is a karaoke bar with locations all over China. It was a great experience to go to this place and really get into this special Chinese Culture and sing my lungs out, together with some amazing people, who went with me:

Then on the fifth of September. The school had its 3rd grand opening. On this day we had a show in the theater where some people like the choir, acapella group and dance crew performed. Not only where there performances, also some people gave speeches. Then the most fun thing of them all on this day was the fact that everyone was dressed up in their national costume. People took all kinds of pictures in those costumes, and so did I. I took a lot of pictures with lots of people, which was really fun. On the end we took one big group picture with everyone in the school:

After this picture we had a great dinner in the canteen. Normally the canteen food is neither bad, nor great (just as most canteens), but today it was really good. The school really put in some effort to make this dinner great. So after all this was a really great day.

In that same week I had my first basketball practice. It was really intense, which I actually liked after all. Our trainer wants us to get in shape for the season so the first weeks he said that he would try to kill us. When you’re busy doing it, you really die, but when you’re done, you really see the point of it. In the same week, I had my first GIF (global issues forum), which is an assembly in the theater where people address a global issue, explain it and afterwards there is time for discussions. The first one was about, the Ivory trade. Now, I also had a few other one, such as about drug trafficking in South America and about schools in China (the last one was quite bad I think, because it was a Chinese guest speaker and the translations weren’t that good, and it wasn’t really a ‘global’ issue.

That weekend I did do one of the most fun activities in school: Hide and Seek in school. It was really fun to play hide and seek in such a big place with so many people. I really enjoyed it. Also I had lessons of ‘course’, but I don’t want to bore you with how my academics are going, when something special will happen I will tell it, but it didn’t. I can say though, that IB is more tough that the Dutch system, but it is a better challenge for me.

I think I will stop it here for this post, but in the next post I will tell you more about what has happened in the weeks after this. For example the Latin American Culture week. Also after that post I will make a separate post about my Golden Week Holiday, where I traveled to the western part of China with ten other people. So there is something to look forward to. 🙂

Although it has been already a few weeks ago,  I’m gonna tell you something about the introduction week. After the first four days on campus, the real introduction week started. So now we had a schedule of what we needed to do. This is a short summary of everything that happened that week.

At first we had all kinds of presentations and information about the International Baccalaureate. And spread out over the whole week short presentations about all kinds of basics things on the campus, such as the library and the IT desk, but I’m not going to annoy you with all that, because you probably don’t care.

On Wednesday evening the was an Open Mic. This basically means that you can sign up and show your talents to the community. Bregje, Isabel and I had the idea to rap a Dutch song, called krantenwijk ( https://www.youtube.com/watch?v=PQf6nh39Tik ).  It was really fun to perform for all these people and get all these nice compliments of all the people in the following days.

Furthermore, we went for all kind of trips for our registration in Changshu. I needed to get a photo for the local registration and I also needed to do medical tests in the hospital, to be able to get my health insurance, but this is all not very interesting, or I need to tell you details of how they got some blood samples.

Another great experience was going out to the nightclub called Zeus. A lot of people of UWC went there and it was a great way to meet/party with people and have som

The day after this great party at Zeus, there was another party at the Glass House. Here everyone dressed up together with their buddy (a second year who can help you/show you around the first weeks) Together with my buddy David from China did I dress up in the Jamaican colors, because we were Jamaica, nothing really special, when you compare to other people who borrowed peoples national costumes. The party was really fun, good music by DJ Julian and good food from all kinds of countries.

Then we realized the day after school will start the next week, but I will tell more about that in my next post.

So I’ve arrived in China 2 weeks ago, on the 17 of August. I haven’t uploaded anything and a lot of things happened in these first days so prepare for a long story.

I still remember how it all started. I came to the airport with my parents, sister and her boyfriend. At the airport I arranged with and together we would fly to China. After some small problems with my luggage, it finally happened I was really on my way to China. At the moment it didn’t really kick in, because I still didn’t realize that I was really going to China for 2 whole years. My parents however, did realize it. 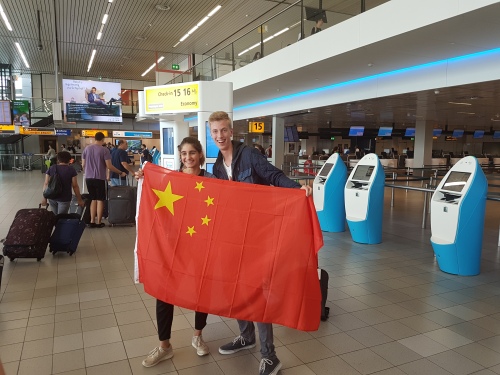 After I took a final picture ↑, I went off to the gate and then got in the plane. Now I couldn’t go back.

Then, after a long trip of about 10 hours. We arrived in Shanghai. People welcomed us very happy and kindly at the gate, then we walked to the checkpoint where a lot of other UWC’ers where waiting. Then we walked to the bus and it rained so hard that we all entered the bus soaked. And we drove away for a 2,5 hour trip to the college.

When we finally arrived at the school the welcome was so overwhelming. Everyone was so happy and excited to welcome all the firsties. It was so chaotic, I hugged a lot of people, lost my luggage out of sight and I saw my second year Bregje for the first time. To give you an idea of what it looked like, follow this link:

From now on the four Dutchies (Bregje, Julique, Isabel and I) are together.

After this hectic, overwhelming and lovely welcome, I met my roommates (two Chinese and one Danish boy). I unpacked my stuff and tried to settle in. I met a lot of people that day and also forgot a lot of new names that day.

The second day was also an overwhelming day where I met a lot of people. We went with a lot of people to the local supermarket to buy some basic supplies. It was a good time to socialize with people. In the evening the was a jam session where people could show their talents if they wanted to. It was so cool to see all these people with amazing talents and to sing along with some songs everyone knows.

That weekend I learned to know the campus bit by bit. I learned a new card game called mao, which is amazing.

After the weekend the introduction week started, which I’ll talk about in another post 😉

So, well… How do I start this blog? It has already been weeks ago since I’ve gotten the news that I will be a UWC student at UWC Changshu in China. I got called and the conversation went something like this:

UWC:    “Okay, you better hold on tight then, because you’re selected to go to UWC Changshu in China.

After this conversation UWC gave me some needed information I was told to write down.

I couldn’t believe at first, that I was selected, since we had our second round of selection, I thought I would stand no chance to all these amazing and talented people. But the odds were different and I got selected, together with 34 other amazing people.

The last weeks I have gone so fast, I’ve met all the other UWC people, we had the welcoming of the class of 2019, and of course I have been preparing to go to china, with visa, buying Dutch clothes etc. But I will tell more about that in another post. This is just a warm up so there is something on my blog. I can’t say I will go on with this blog when I get to China, but I hope to find the time for it. 😉

I’m an UWC Changshu student (2017-2019). I’m from the Netherlands, and this is my blog about my experiences at UWC Changshu China.